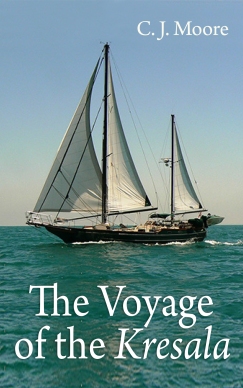 Prince Gentil, in flight from the destruction of his father’s royal palace, finds a berth as crew on the yacht Kresala, along with his friend Alick. Drama and adventure await them as they set sail for the Winter Isles far off across the Northern Ocean.

But the skipper Nestor, and his mate, Gorka, are themselves refugees from a troubled past, and this is no ordinary voyage. To add to the mystery, they are embarking on a secret mission involving a hidden passenger on the boat whom Nestor calls his “cargo”.

Gentil and Alick have much to learn as they sail through storm and becalming, and face dangers not only from the elements but from wreckers and smugglers. Soon, too, the enchanting figure of Itxaso enters Gentil’s life and together they must confront the terrifying threats that lie at the end of the Kresala’s mission.

The Voyage of the Kresala is the fourth book of The Seven Songs.

How it came on them so suddenly out of nowhere, without the slightest warning, they never knew. Perhaps because it came out of the dark, literally. Perhaps because they were both nodding off with the fatigue that dulls you in the latter stage of a night watch. They simply hadn’t noticed that freshening of the wind which warns of imminent bad weather. Nor had they checked the barometer, otherwise they would have seen the dramatic drop in pressure. But for good or ill, Nestor, skipper of the forty-foot ketch Kresala, had gone below to his berth and left them on watch, both inexperienced as they were. That was when their problems all started …

Enjoy that? Read the rest – download The Voyage of the Kresala from the Amazon Kindle store.